Our Story;  What inspired the Belle Starr Farm, and how it came to be: 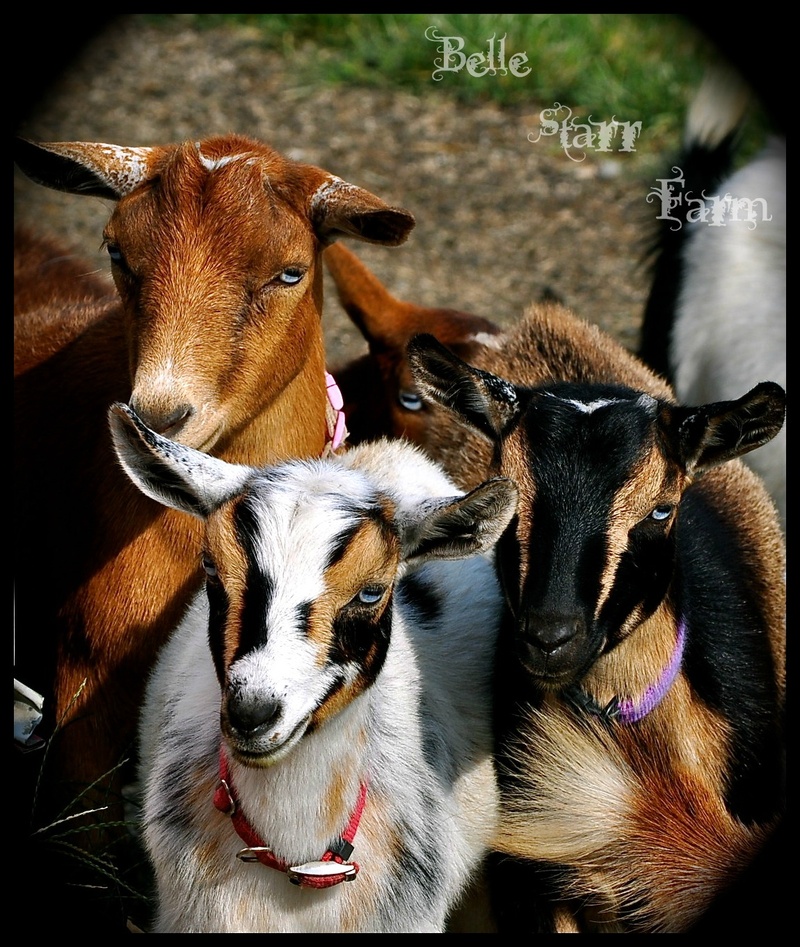 To have an excellent herd of animals to show and sell kids from while keeping it small enough to "enjoy" them.

We have carefully hand-picked our herd and have a quality base of animals out of a variety of time-honored, reputable farms........ and direct descendants of AGS  and ADGA Champions!

Our goats are raised with the best possible health and growth of each animal in mind.  We achieve this through preventive care, proper feeding and grazing, sanitary facilities, and LOTS of LOVE and socialization!

Whatever your desire, each Belle Starr Farm kid will come to you free of disease, current on vaccinations and deworming, disbudded,  and ready to enhance your barn........ and melt your heart!

It has been our mission for years to have many animals and provide them with the best home and care that can be given.  We love all God's Creatures and started out with cats when we first married in 1993, then dogs & cats, then dogs, cats and 2 Pygmy goats in 2001, leading up to cats, dogs, goats and 2 horses in 2006.

In July, 2006, we moved to our 20 acres of property and lived in a 38 foot travel trailer on the property while building our Farmhouse.  We spent 8 months in it with 5 cats and 2 large dogs, husband, wife and a 9-year-old daughter.  It had one tiny toilet which froze and couldn't be flushed and a teacup shower (we considered this really LUCKY).  We had an outhouse delivered soon after we discovered how the toilet only flushed outside the trailer! (When it flushed at all)

Meanwhile, we had our barn built, and started adding to our Farm which went through a series of name-changes (Triple J Farm, Soaring Eagle Ranch, Lucky Starr Farm...) but eventually became the Belle Starr Farm April, 2008.   We added a pregnant Pygmy Goat, my mother's pet dwarf bull (soon after arrival becoming a steer) and a "Lucky" duck.

After a rough 8 months in "the wilderness," mostly in the snowiest winter in a long time, we moved into our beautiful farmhouse in February 2007.  We then promptly added more ducks, then a llama to protect the ducks, then Guineas and geese, then more horses, Nigerian Dwarf Goats and finally, a Great Pyrenees to protect everyone (the llama wasnt' interested).

We are very proud to share with you all our beautiful animals:  We hope you'll get as much enjoyment out of viewing them, as we do out of loving and caring for them!