OUR Nigerian Dwarf Does:

FOR SALE:    $350.   Belle Starr Farm Clementine  will be available for sale (sadly ...for me </3) but good to whomever buys her.  She is a bottle-fed, 3 year old (just turned 3 Jan 13 of 2017) doe who is out of wonderful milking lines (Jack Sparrow), and beautifully marked, blue eyed, and FRIENDLY!  Loves people and of course treats!  She will be available for $350...... proven dam, good milk lines, friendly, and still has milk which could be revived by beginning her milking again and increasing her grain.    She was a bottle baby who lived in my basement in a big dog kennel attached to our walk-out and it shows!   She doesn’t know a stranger! 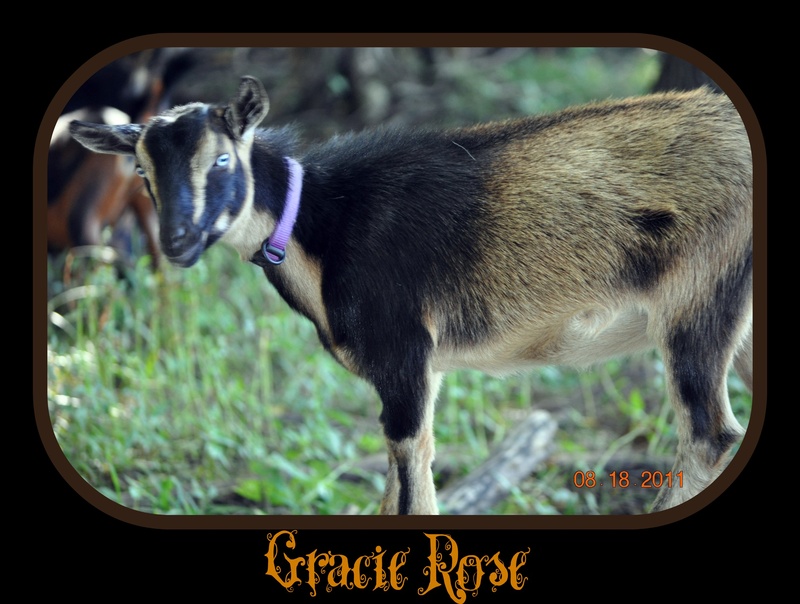 . My darling, precious Hattie!   Though I absolutely hate to see you go, you will bring the new people much joy!  Your udder is a dream.  Your personality is a dream!   Your Piddlin Acres lineage is evident in your long, level top-line and prominent brisket.  I can only let you go since I’m keeping your daughter, Hetty-Hellion.  You are a “whole-package” goat!

Hattie is an excellent mother, and has always kidded with no troubles, and fed and cared for her broods each time with expert-Mama-Goat care.  Her udder is very full and  well-attached and tends to remain symmetrical despite kids nursing causing lop-sidedness.

She kidded this year with two bucks ( Dreaded buck year! ) who will be Wethers,  and can come with her for no additional cost.  They are darling chocolate boys with white accents and blue eyes, and are fairly friendly and interested in me!   Would make good companions for children or lonely livestock or their mother if a person wanted only one doe to milk, and needed companionship for her.  One of them is polled.  They can be weaned March 4, 2017.

She is also “in Milk” (kidded Jan 14) currently,  and has the personality and patience to become a very willing, very competent milker for someone.  She is a real sweetheart!

ABOVE:  is a “character shot” of Hattie (on the right) with her daughter, Hetty (left)
BELOW:  Baby pic!  She was a BOTTLE-BABY raised IN my house!   Very sweet. 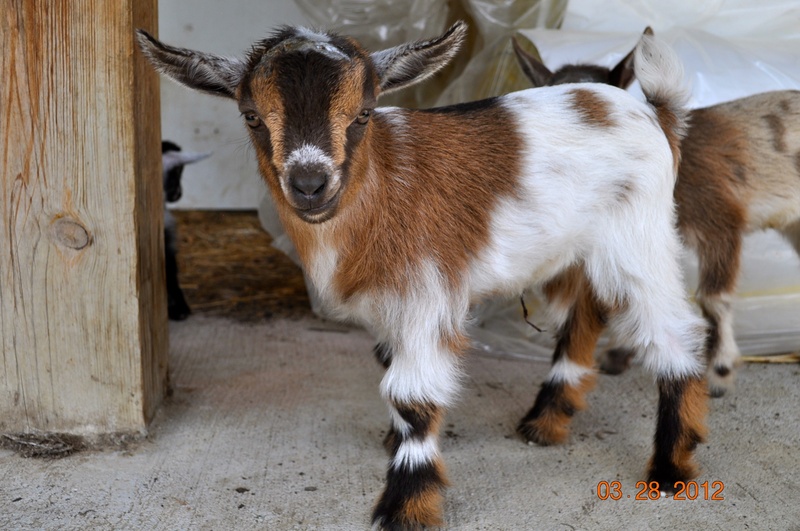 This is my Jemima.  Another bottle baby out of Kizzi’s Kuties Inferno (who is son of Caesar’s Villa Flirt’nWithFire).  “Fire” as the caesar’s villa buck was called is out of: MCH Caesar's Villa Brat in the Barn *S x SD:
Evident milk lines for both Jemima and her 1/2 sister Hattie (animal above) and graceful long necks, wide escutcheons, prominent briskets,  and of course, really nice udders ...and great milk production!

Jemima kidded with QUADRUPLETS this year, and triplets in 2015!

Jemima and hattie were raised together!

2nd: pic is her udder taken 3/5/17, a day after her 2 boys went to their new homes.   It is very full, and evenly-proportioned, with nice teats that hang straight down.  This is her 3rd freshening udder.  It just improves each time!   I absolutely LOVE this doe.

3rd:  pic of Mima as a bottle baby getting exercise outside the basement stall they were raised in! 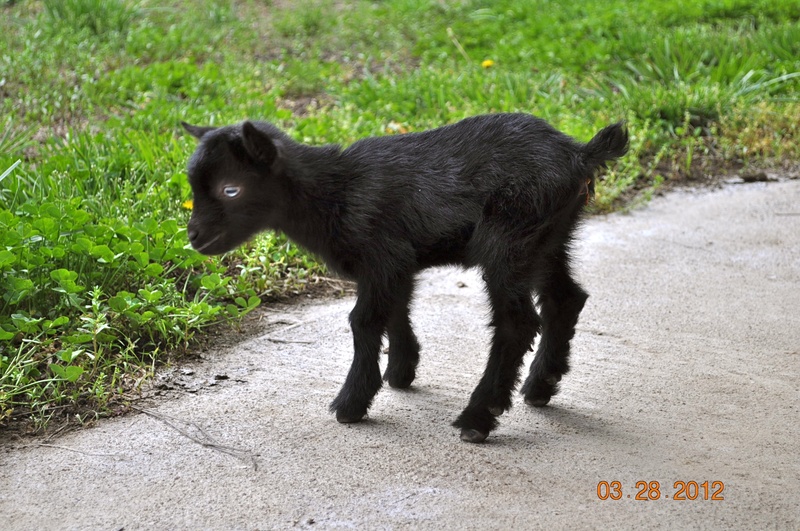 We were so thrilled to get "Jingles" as we call her from Piddlin' Acres last fall.  She is from excellent bloodlines from a cornerstone doe for Piddlin',  and of course, an excellent farm!   She is very small and very sweet (was a bottle baby) and we can't wait to see how she develops this year!

Jingles is still absolutely sweet as sugar, and cute as a button!  She has been retired from kidding duty though due to being bred (accidentally) too young, and kidding at 11 months old and 30 lbs.   That was in 2010 and we did not know she was bred until the day she started squatting and pushing!  The baby was BIG.  TOO BIG to fit through the pelvis of this young 30 lb doe.   I could not the the kids head through the pelvis anyway I turned it and called the vet...who came out only to turn right back around and us to follow him in to the office for a c-section.  I was certain she (or I) was going to DIE!   I could not believe it was happening.  The last 2 hours, a white front leg and black hoof hung out of her.  It had long since stopped feeling alive.  I just wanted to SOB all the way to the Vet?s office.   It was my fault a tiny young buck (Flat Rocks Ghostrider) had broken in when he was maybe 10 months old and bred her.   I was tasked with holding her in the standing position throughout the entire procedure......it was very nerve-wracking, although the local block they had given her sure seemed to work.  She didn?t move, or cry out, or try to lay down.  When I saw the leg was gone from the back of her, and they pulled the baby in a towel out from her incision, I said ?Oh, I?m sure it?s gone, huh??   to God or the Vet or whomever would listen..... and the Assistant nodded a ?yes,?  About 2 seconds later, as I was still holding Jing, and they were stitching her up, the Assistant cries out a little bark of surprise!  and says, ?Wait!  it?s moving!?   That big ol?  3 lb baby was ALIVE! ....after trying to come out like 4 hours ago, and riding in the car in a dog carrier with her leg dangling out of  her dam, and it was ICE cold ....  I could NOT believe it!    That young mama had made it through, and her baby had toughed-it-out too, and somehow, was alive in this office.  AND it was a doe!  A doe that weighed 10% of her Dam?s body weight!   That doe later came to be known as Cowgirl Heart, named right there in the Doc?s office .....because I said, she?d ?cowboyed-up? and got through it all ......ALIVE, ALERT, HEALTHY, and BEAUTIFUL!   I leaned a lesson that day......probaably my fist of many.....but hey, I didn?t know that then....but the lesson was count no-one out......and NEVER give up until there?s no more breath left.....because if I had, neither of them would be around today!   and they were ....ARE.....still SO WORTH-IT-ALL!

Jingles went on to have the next kids 2 years later... We wanted her all grown up, and her uterus to mend 200% before we ever tried it again.  So her 2nd set of kids (2 big bucklings) made it out, but one was seriously stressed, and passed away.  The other was fine but Jing’s recovery was not a fast or easy one....She was VERY sick....  and it took 2 weeks or so to get her back to eating and acting normal.  She did nurse her one boy, but it took a sonogram at the Vet’s office (same vet!) to convince me there wasn’t another baby lodged in there the way she’d squat, and grunt, then then lay down defeatedly.   She finally got back to normal, and we didn’t breed her again for 3 or 4 more years, and we had really not planned to breed her at all  -- but once again, she became pregnant in ’16 by out one RESIDENT BAD-BOY JR. buckling who was Houdini incarnate!  and 5 months later, with almost no udder, she started pushing, and I could tell it wasn’t good!  So back to the same vet for a 2nd c-section.    She has recovered from that one.....actually lived in my living room the first week after the operation so that I could monitor her, medicate her, check her temperature, and basically just baby her back to wanting to live.   She’d lost the baby, a full term, xtra full term really, BIG ol’ white baby again......but this time it was dead, and she was VERY depressed, and uncertain. :-(    The recovery was very smooth and in line with the first recovery -- but I swore to her I’d NEVER let her around an unneutered male again.......   I think she’s already forgotten the deal ....but I’ll hold her to it.   I don’t have another c-section in me!

Here’s Jingles today with all her hair grown back over her incision, and a bandana still on her neck from when I was trying daily to make her FEEL better-enough ....to live.   She’d gotten a spa day complete with hoof trim, spa-shave of the udder and furry-escutcheon area, and then a massage with peppermint udder lotion, and a red bandana!   It gave her new life, strength, and hope (I think...) and she still wears it to this day! 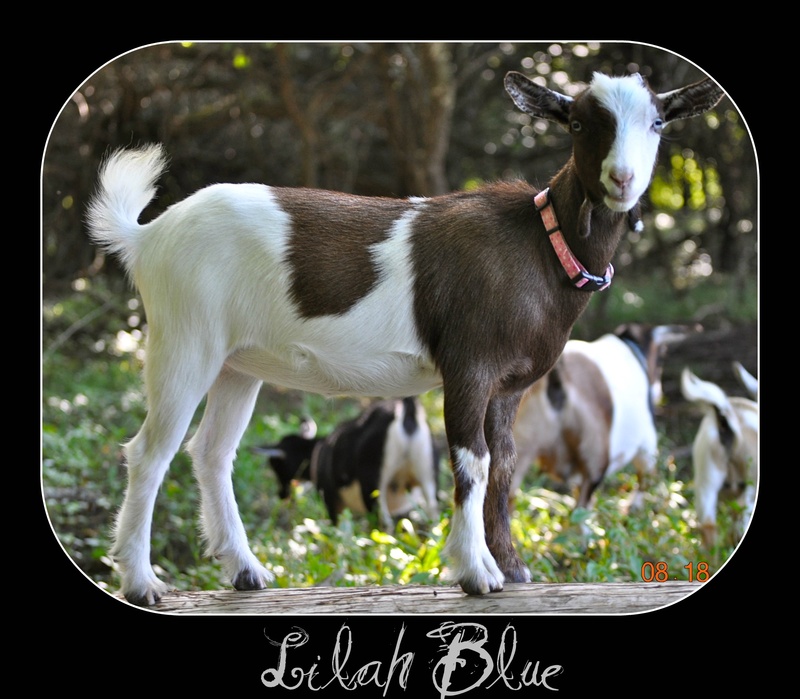 Belle Starr Farm Maybelle Shirley  (May May) DOB:  Mar. 9, 2012:  Maybelle is living with my mother and her two wether-boys and LOVING life! 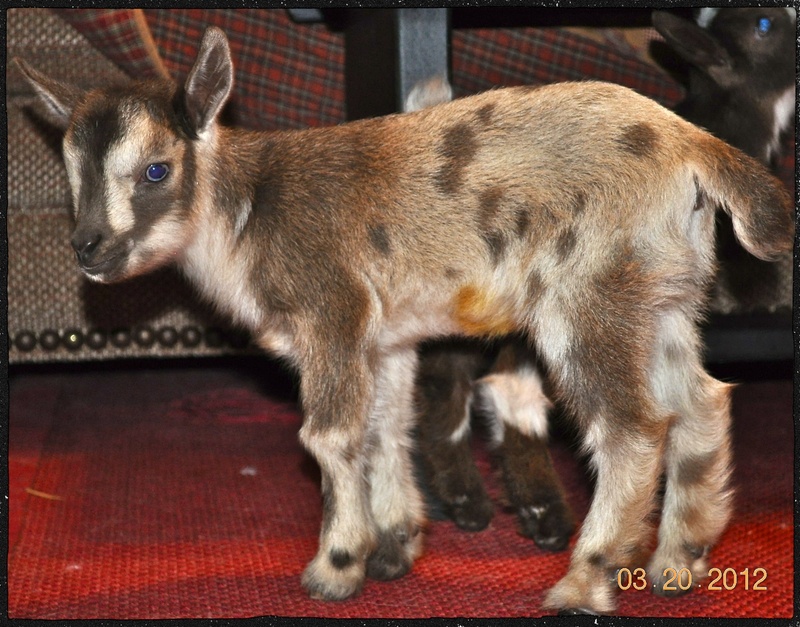 Piddlin Acres BRS Rockin Gypsy  (Roxy) DOB:  Dec. 31, 2010  *FOR SALE:  $350.   Very feminine, dairy conformation, wonderful udder, great attachments and hand milk able teats.  Roxy is the epitome of “dairy.”   She has the softest fur and skin and flat ribs.  She has been a MORE THAN COMPETENT mother for us here at the Belle Starr Farm for the entire time we’ve had her.

She just kidded buck/doeling twins  -- so she’d come to you IN MILK (and once the kids stop drinking believe me, she has a LOT of it!)   The flow and arrangement of her teats is yet another plus to her milk potential.  I milked her one season and she was compliant, if not friendly.  She would make someone a great milker for a couple of more kiddings at least.

Also, all her kids are BEAUTIFUL (like she is) ...this year’s girl “MoonRox” also for sale -- is obviously moonspotted! and polled and just as feminine, and dairy-looking as her beautiful mother.  She had two other gorgeous spotted does (one was Maybelle Shirley..above) and a black and white crazy patched girl the same year.  Throws lots of chrome! 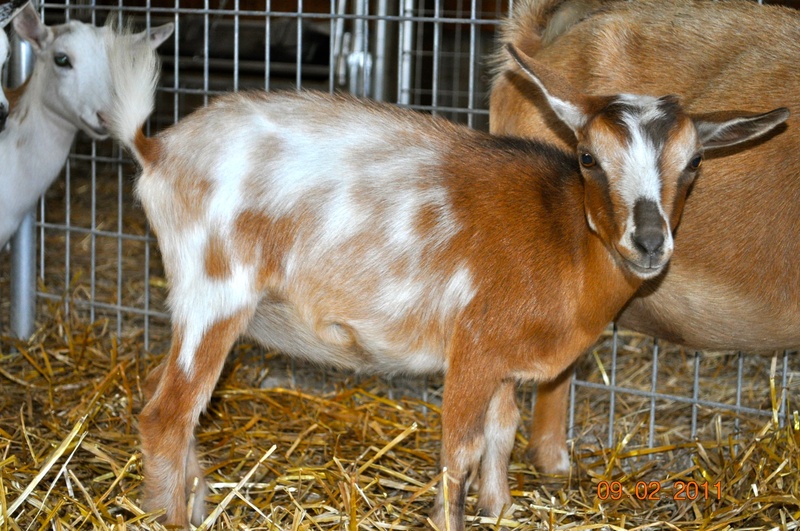 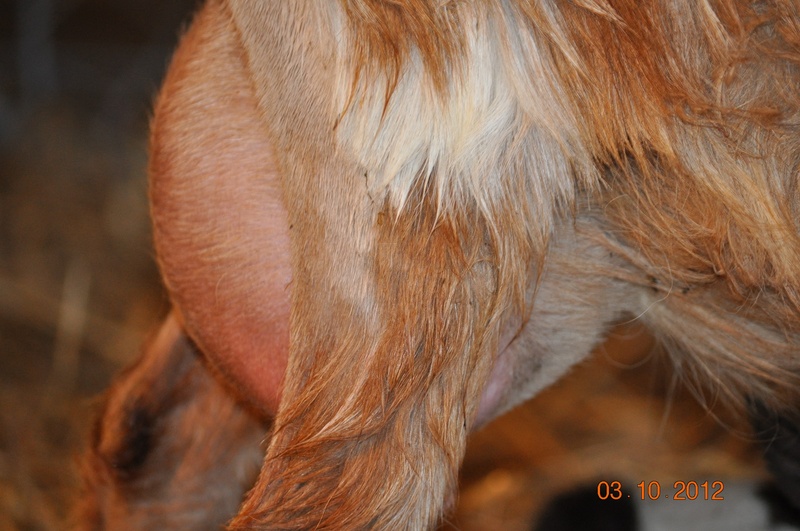 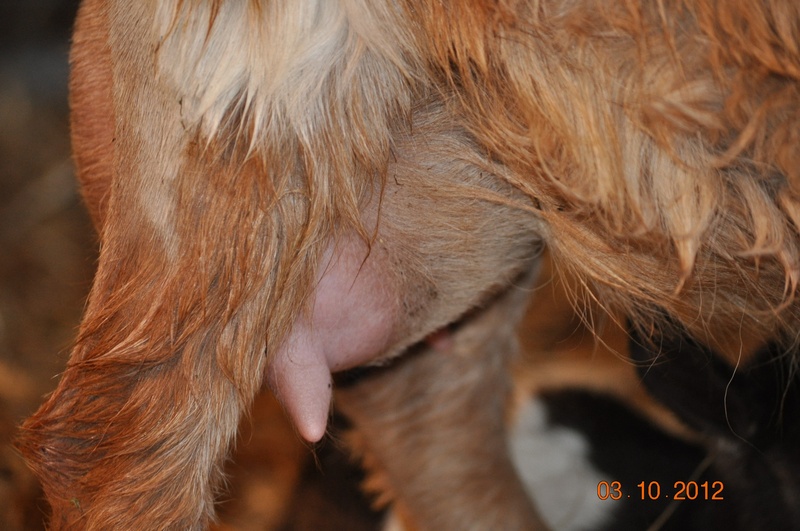 These pics are from earlier times of Roxy Rose is a very fashionable and dairy doe who is out of excellent farms and lineage.  She hails from 5 Acre Farm in Grafton, MA but gets her background from Piddlin Acres on her Daddy's side, and Old Mountain Farm and Rosasharns Farm on her Mama's side.  Her sire is a 1x Grand Champion Senior Buck  and many times Reserve Champion, and is known to be an "udder" buck, meaning he improves the udders of  all his Daughters' !

She is loaded with credentials and beautiful to boot.  In addition, she's a proven mother and milker, and  I have her most recent kids here at our farm with her.

The does say:   "Baaaah  Baaaah Y'aaaaalllll!" We test our herd for CAE & CL - and maintain a completely closed herd.  Results are as follows:

**NOTE:  We use WADDL as our laboratory for our testing.

CHECK out Prairiebellecandle.com for all things Goats Milk Soap and Handmade Toiletries and wonderful Hand-poured Candles!

2010 AGS Nationals in Sedalia, MO:  We attended w/ Cowgirl, Calamity, Kate, Silver, Sweet Pea and 6-Gun.  Cowgirl was 3rd in her class of 16 and Calamity was 4th, Silver was 7th.  Very Fun! and educational!